Your guide will meet you at the exit gate of port than drive to the House of the Virgin Mary includes beautiful panoramic views of the Byzantine Castle in Selcuk and the Temple of Artemis. A long and winding road affords wonderful views of the valley en route to the Shrine of St. Mary. The House, beautifully situated in the Solmissos Mountains, is considered by the Vatican to be the final resting place of the Virgin Mary.

We proceed with ancient Ephesus, where you´ll pass through the Magnesia Gate and start a slow, downhill walk to the history of 3rd century B.C. Your experienced  guide will highlight well  preserved the magnificent sights. Trajan Fountain, Temple of Hadrian, the Odeon Theater. Once used for both political and social entertainment of  officials and wealthy people , the beautiful Celsus Library with its extraordinary  facade and two story Corinthian-style columns. The Great Theater is one of the few structures still used today. It was  twenty-Four thousand seating capacity. This is the place where St Paul perched on his missionary journey. Although it was once an arena for gladiator games, it is now home to annual spring festivals.

Basilica of St. John is still a very impressive sight to visit. Among the ruins, large columns, frescos and mosaics still visitable. Basilica of St John was built during Emperor Justinian´s reign. The structure was planned in the shape of a cross and covered with six individual domes, the central one of which is thought to lie directly above the burial site of St. John. End of  biblical Ephesus from Izmir , Return to Izmir port.

Guests must be able to walk approximately 1.5 miles over uneven and cobblestone surfaces, inclines and 10 – 30 steps. Comfortable shoes, a hat and plenty of sunscreen are recommended as shade is limited the order of the tour itinerary may vary in order to avoid congestion. Guests should watch their step at all times in order to avoid injuries.

What the Price Includes;

Biblical Ephesus from Izmir is recommended  for Christian Travelers. 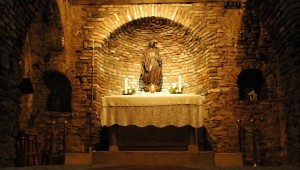